What to Do When a Guy Doesn’t Text Back: Don’t Panic & Don’t Stoop

Wondering what to do when a guy doesn’t text back? It’s easy to panic and waste precious time on your worry. Instead, move the hell on! 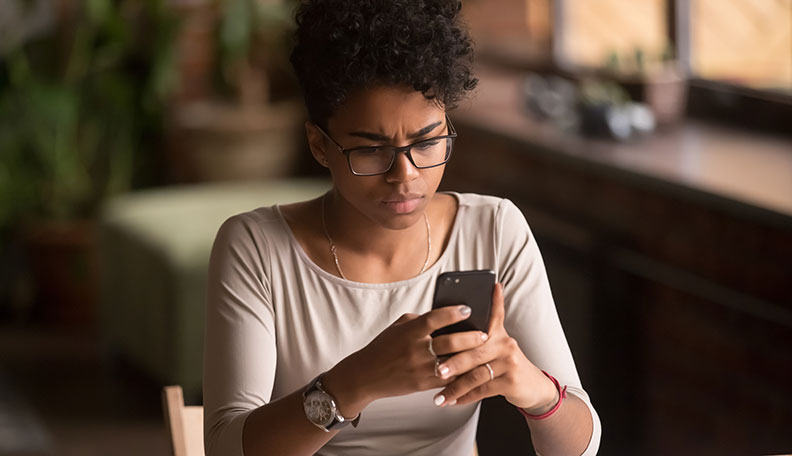 There are unspoken rules which come into effect when you talk to someone on a “more than friends” basis. It can almost seem like the general rules of humanity go out of the window. Some things feel cruel! If you’re left wondering what to do when a guy doesn’t text back, you know exactly what I mean.

Surely, if you like someone, you should be able to text them freely and expect them to reply and reciprocate or say “no, thank you.” Wouldn’t life be easier that way?

Instead, we get the wonderful world of ghosting, which basically means radio silence coming our way, and a world of unanswered questions and confusion.

Just reply, damn it! [Read: Calm steps to deal with the emotion of being ghosted]

You’ve probably agonized over what to do when a guy doesn’t text back more than once. I bet you sent a second text, didn’t you?

I operate a one-strike policy when it comes to texting guys. I do this because I have been fooled far too many times to repeat it, and my time is too precious. Trust me, when you’ve been ghosted as many times as me, you develop a thick skin.

I’m quite aware that I sound a bit like a love failure. It’s actually quite the opposite. In the past, I will freely admit to being too keen and doing all the chasing. Then I realized that chasing doesn’t get you anywhere. Give them the chance, wait for the reaction, and if you don’t get the one you want, move on.

The chances are they’ll react later than you expected. By that point you’ll have moved onto someone who can be bothered to answer a text.

Seriously, guys, it takes less than 10 seconds! [Read: How to handle the annoying wait when he doesn’t text back for days]

The power game we all hate

You see, the reason most guys don’t text back is because they want to win a game that you had no idea you were actually playing. It’s like a game of cat and mouse, but one which actually involves your emotions. No fun whatsoever!

In my opinion, and in my experience, guys don’t text back straightaway because they want to keep you waiting. They still adhere to this very old fashioned view of the ‘treat ‘em mean, keep ‘em keen’ game. Surely we left that behind somewhere in the ‘80s? [Read: How to ignore a guy that ignores you and win back your power]

I am not a fan of being treated in any way mean, thank you very much, so jog on! Let me meet someone who actually understands basic respect.

It’s a power game in many ways. The issue is that most of us fall for it time and time again before we wake up and realize that’s actually happening. If they keep you wanting long enough for a reply, when they finally do, you feel so euphoric and happy that you’ll drop at their feet.

The reality? You send a text. You’ve usually spent hours agonizing over what to say and how to get the tone somewhere between keen and breezy. Then you sit and wait. And you wait. And you wait some more. After a few hours, you get a little worried and you start to think all sorts of different reasons for their radio silence.

Of course, give them a little time, because you don’t know what they’re actually doing in that particular moment. Maybe they’re eating, maybe they’re sick, maybe something happened. However, it doesn’t take more than a few seconds to inform someone that there is an issue and they’ll reply soon.

Maybe that’s just me, but hey, I’m old fashioned like that.

So, you’re stuck with silence and you know they’ve seen it. There is one conclusion to come to after a short while, and I’m sorry to say it. They’re just not that into you.

The cold, hard reality of what to do when a guy doesn’t text back

I don’t know about you, but when I’m ignored, it really annoys me. You’re probably the same. You feel indignant. Why can’t they even have the common decency to reply?

Then, you feel down, because the fact they haven’t replied means that they just don’t want to.

Grab the ice cream and wallow for a short while. But do not touch your phone! Seriously, give it to a friend or hide it in cupboard somewhere, but do not text again.

If you text a second time, you border on desperation. It’s bad enough being ghosted the first time, but can you imagine the damage of it happening twice? Don’t be that person. Rise above it and put it down to experience.

Let’s face it, would you really want to date a guy who can’t be bothered to show common decency to another human being?

Of course not. [Read: Why do guys ghost? 15 common reasons why they turn into cowards]

Dealing with the aftermath

Now, you’ve realized that this isn’t good news and you simply should chalk it up to experience, here’s a great way to deal with the aftermath. This method focuses entirely on you, and that’s how it should be.

Firstly, pamper yourself. Make yourself feel amazing and then head out with your friends for a night of total fun and frolics. This night should be about fun and not at all about wallowing or constantly checking your phone.

Of course, if you happen to bump into Mr. Ignorant while you’re out looking amazing and having a great time, the chances are he will suddenly remember the text you sent and come up with an amazing excuse for why he didn’t reply.

Do not fall for it.

Instead, turn on your heel and enjoy the rest of your night, enjoying his discomfort just a little somewhere in the back of your mind. This really is his loss. [Read: How to play the player and return the favor like a boss]

There is no room for power play in relationships

Even if a guy texts back belatedly, full of excuses, do you believe them? I personally wouldn’t. Of course, it’s up to you, and only you can decide. As I said before, a quick message to let someone know that you’re a little busy and you’ll reply properly later really doesn’t take more than a few seconds, especially given the speed at which most of us can type on a phone these days.

The fact they’re replying late is mostly down to wanting to have the upper hand in the situation, i.e. wanting the power on their terms. If you bow down to this early in your relationship, you’re setting yourself up for a power play relationship which will zap your energy… and then some. Who has time for games?

Understanding what to do when a guy doesn’t text back really isn’t rocket science. Although, you will feel conflicted,  deep down you desperately want your phone to beep and for it to be him. Keep your eyes open and remember the truth: a quick text takes seconds, not days.

[Read: Could he be leading you on and playing you for fun?]

At some point, you will have agonized over what to do when a guy doesn’t text back. If you haven’t, you will at some stage. Always remember your worth! You’re worth more than some guy who can’t be bothered to send a text.

Nicky Curtis
Having stumbled from one relationship drama to another throughout her 20s, Nicky is now somewhat of a guru in the crazy world of life and love. Telling it how i...
Follow Nicky on Facebook
Pin It Tweet Share