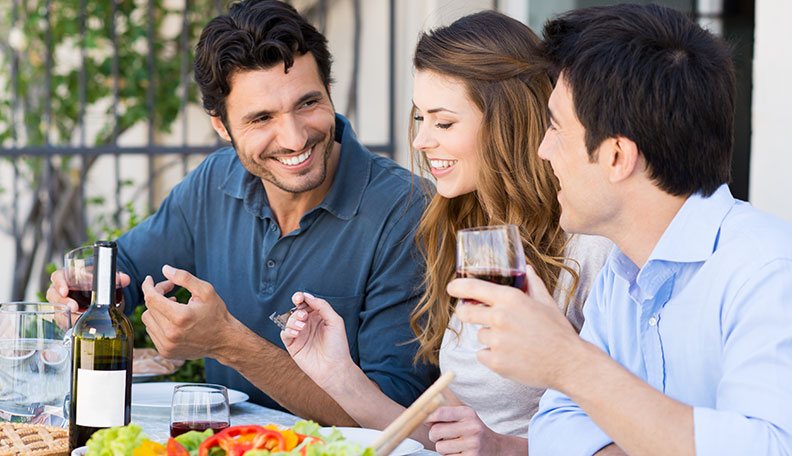 You have your crush in your sights, but through your videogame marathons and beer binges, he still treats you like a bro. What’s a girl to do? By Minot Pettinato-Little

You have a major thing for one of your male besties: he’s hot, fun, smart, and you guys always have a blast when you’re together. You decide tonight’s the night you’re going to spill the beans on your secret feelings for him, when all of a sudden he sits down next to you, farts and punches your shoulder like you’re one of the guys. Ick.

Let’s face it, “You’re like a little sister to me!” is a horrible phrase to hear from the guy you like. The awful truth is that being “friend zoned” isn’t just something only women do to men. No, this unfortunate occurrence happens to women almost as frequently, with the same frustration and anguish that goes along with it. [Read: 12 dating stereotypes about women in a man’s mind]

How to deal with being treated like one of the guys

So what do you do when you’re being “friend zoned” as one of the guys? Here are 8 tips on how to get your guy to see you as a lady.

#1 Embrace it. Easier said than done, right? If you can overcome the absolute frustration that goes along with being ignored as the female sex, you may see that you can use your powers for both good and your own evil plans. Are you the “token girl” within your circle of male friends? If so, then you probably have all your male friends flocking to you for girl advice, divulging emotional issues, family problems, inner fears, and all sorts of juicy tidbits coming out of a guy’s mind. Not only is all this stuff fascinating, but you may even be able to use it to your advantage to lure your unsuspecting friend into romance. [Read: 13 ways to be more charming and approachable]

#2 Work on your scent. Ridiculous as it sounds, men like girls who smell good. Many scientific studies point to scent being tied to emotion, memory, and more importantly, attraction. If you’ve only been sporting your body’s own personal musk around your guy-friends, try splashing on some feminine perfume or scented oil around and see what happens.

Pro tip? Men are completely attracted to the scent of vanilla, and the pumpkin pie smell has actually been said to stimulate sexual arousal in men. Double-pro tip? Just ask the guy what scents he likes and wear it around him. This will then clue him in on the fact that you may be into him, while also showcasing how you can have your own take of the scent he likes.

#3 Stop what you’re wearing. As an empowered woman, there shouldn’t be any reason to change out of your t-shirt and jeans just to appease a man’s preconceived notion of what a “woman” should be. However, if you really want to appeal to your crush, and he’s been otherwise unable to see your feminine side, you may want to consider tweaking your wardrobe… just a bit.

Instead of boot cut jeans and your last ex’s old band tee, try rocking some skinny jeans and a girl’s t-shirt, or blouse. If you desire to be seen as girly, don’t shy away from dressing the part. While busting out a dress or miniskirt may simply result in your guy friends teasing you, he’ll probably be blushing while he’s mocking.

#4 Express interest in other males and talk about sex. And not just ones on the TV. You may want to do a little bit of innocent flirting with one of your other friends, or a new male acquaintance to see what kind of a reaction you get from your male friends.

Once you begin expressing an interest in having a boyfriend, or start talking about the joys of sex, your male friends may just start to get jealous and put you up on the table as a romantic option. This doesn’t mean you are bringing up “The Dirty” to get your friends to see you as a sex object, rather, you’re trying to show them that you have a vagina, and it likes getting a little action just like every other female they seem so keenly interested in.

#5 Forgo farting and burping. If you really want to be seen as a lady, you may want to stop with the farting and belching, at least while you’re around your guys. Excuse yourself to the bathroom and relieve your aching belly. Otherwise? Try to build an air of mystery. [Read: 11 huge dating turn offs for guys]

#6 Dance, or show your rhythm. If you’re looking to change up your image, you may want to consider taking your guys out to a party or club and showing them some of your moves. Dance slowly and don’t be afraid to show how rhythmic you can get. Again, this is not simply to show yourself as a sexual plaything.

While you want to show how you can shake it, that doesn’t mean you should be acting like the new-age skank of Babylon. The fact is, both men and women respond sexually to movements, and the more rhythmic your guy can see you behaving, the better. [Read: How to attract him in a way he can’t resist]

#7 Explore the girly side of life. Take a night off from the guys and try exploring something a little more girly. Paint your nails, go dancing, buy a lacy bralette, buy some new clothes, and take an interest in Pinterest, DIY projects, trying fun new hairstyles, and experimenting with makeup.

None of this means you have to give up video games, anime, action movies, or beer night – it simply means you’ll be a well-rounded female exploring the best of both sexes. [Read: 25 things guys find sexy about girls]

#8. Make some female friends. Just because you’re one of the guys doesn’t mean you don’t already have female friends. But if you don’t, you need to make some pronto, and if you do? Utilize them. Not only will they give you a break from feeling completely unattractive to your male friends, but they can also give some personal insight into how to help with your friend zoned scenario.

#2 You WILL feel weird about no longer being one of the guys. If you do manage to get out of friend zone-hell and date your guy friend, it should be noted that you will begin to feel weird about it, especially if you begin to lose Bro privileges from your other friends. You may even question if you’ve done the right thing.

[Read: 9 quick ways to know if your crush just isn’t into you]

Keep up the fight to get out of the friend zone. With a little bit of tweaking, a positive attitude, and a little bit of charm, you’ll be busting your way out. If not? There’s nothing wrong with being close friends with an awesome group of guys.


Waverly Smith is a freelance writer who has been getting paid for spreading her sarcastic take on love, life, and sex since 2010. She is many things that peo...

How to Flirt with a Friend: 18 Ways to Tease without Being Weird

What Is Pansexual? The Full Guide to Everything You MUST Know

Overly Attached Boyfriend? 15 Subtle Ways to Get Your Space Back