Does your Boyfriend have a Flirty Girl Best Friend?

There’s nothing worse than dating a great guy who has a flirty girl best friend. Ever been there? You see her pawing your man, and you really can’t do a thing about it. Samantha Matthew’s been there and learned what to do. 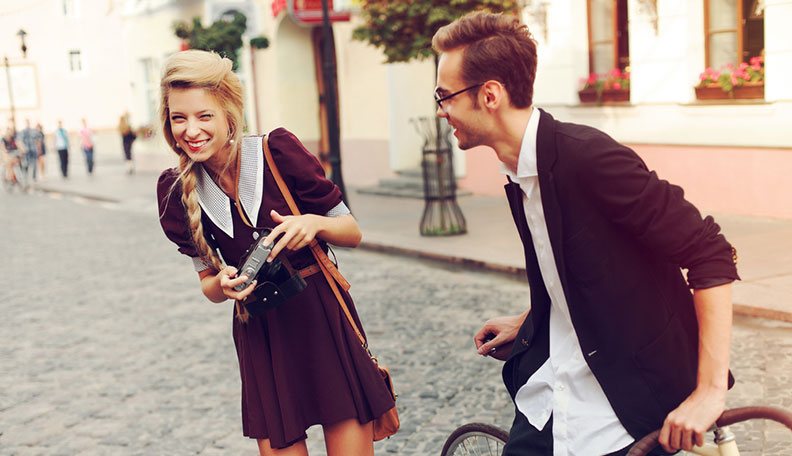 You’ve burned and ranted to yourself each time you come in contact with a certain pretty gal friend of his.

There you are, just sitting beside your boyfriend, downing a cup of latte, filled to the brim with love.

And then it happens.

You hear a high pitched ‘Hiii!’ and one second later, you’re forced to slide aside as this good girl pal of his joins the both of you, and plonks herself next to your man.

Now really, next to your man?! WTF!

There’s so much space on the other side of the table, and yet, she needs to stick to him!

Grr… that’s all you can hear within yourself. This gets really frustrating.

Who the hell is this girl to intrude into your private romantic time?

And to make things worse, she gives your man a bone crushing hug and makes sure her breasts spread all over his chest like peanut butter on toast!

And then she gives him a peck on the cheek that is so dangerously close to his lips.

Putting up with your boyfriend’s girl best friend

I wouldn’t be surprised if I saw sparks erupt off your hair strands. She then holds his free hand (the one you’re not yet holding) and starts stroking it, and coos into his ear and giggles madly about something you can’t really hear. Now, isn’t cooing your job? And doesn’t this girl have something better to do? And why does she have to keep kissing his cheeks and hug him all the time, especially when you’re around!

Well, it is sad, miserable and just utterly annoying. But what can you do about it? Unfortunately, nothing!

Why? Because she’s his best friend and they’ve known each other way before you even got into the picture.

Like that’s a valid reason, right?! But still, that’s what your man says, and that’s what you’re forced to believe. But you obviously can’t stop hating this girl who torments your thoughts and your secure relationship in such a subtle and yet blatant manner.

Do you hate your boyfriend’s girl best friend?

Now, if you’re really pondering over this question, that’s just way too silly. Of course, you hate her.

Why? Because she turns your man’s antennas on each time she comes by. And your man feels awkward and blushes when she playfully strokes his cheeks or squeezes his butt cheeks. [Read: Flirting by touching]

And you’ve always wanted to be the only one who could make him blush with happy embarrassment. And is there another reason? Definitely. She’s known him way longer than you’ve known him and she behaves like she knows more secrets about him, and she always pops those annoying questions like “Hey, did he tell you about the thing he did in fifth grade?”

Of course, he didn’t tell you, because he forgot all about it. But she remembers it, and you look like a fool while she recounts to you about his secret escapade during his school years.

You don’t really care whether he peed in his pants when he was seven years old, that doesn’t bother you one bit. It’s the fact that she knows more about your man than you do, and she can’t stop bragging about it that messes with your mind. You obviously want her dropped off the planet, because you feel so helpless each time she comes around. [Read: Getting over insecurity in a relationship]

Does your boyfriend’s BFF hate you?

But what she knows for a fact is that he is her best friend. And another fact she knows well is that you get jealous when you see her with your boyfriend. That’s the bit that creates a problem. You see, she loves to make you jealous. She loves the way your man drools and laughs when she’s around. And she loves watching your red face each time she kisses his cheek. She speaks highly of you and describes you as the perfect girl for him, and talks a lot of good things about your man to you, which only makes you feel miserable. [Read: How to deal with jealousy in a relationship]

And each time you act grumpy with this girl or snub her, your man gets all over you and tells you to behave well with this best friend of his. She may be a nice person, but she would always want his attention, and even more so, whenever you’re around. And it doesn’t end with meetings.

At times, her call may interrupt both of you in the middle of a steamy love making hour, and she may actually realize what you guys are up to. She may even ask details, which is so gross and frustrating, because it just shows how easy it is for her to talk dirty with him. It’s annoying to see her behave like his nanny, asking him about his body or his man parts while she coos with her sultry voice. Now, that is so-not-nanny material!

Your man’s reaction to your behavior

“Hey now, sweetheart, why are you behaving this way? I’m telling you, she’s just a very good friend!”

Well, how many times have you heard this line? How many clumps of your own hair have you pulled over this line? And how many suspicions and thoughts have come across your mind each time he said this line?

Unfortunately, his answer won’t change one bit. Nor is his behavior around her going to change either. He really believes that she’s just a friend. But here comes the tricky part. Whether he’s told you or not, he may have been intimate with her or they would have hoped to be intimate with each other at some point of time before you came into his life. It may have been a little crush or a bit of one sided love, but no girl best friend gets flirty unless there’s a bit of sexual chemistry in the air.

This is the reason why she’s so comfortable around him sexually or otherwise. And another biggest reason behind why it’s all fine with your man is because he likes the attention. [Read: How to get a guy to like you]

He likes holding hands with her, and he likes getting her attention and he likes talking sleazy with her. And of course, he loves it when she hugs him until her bosom spreads all over him! Why? It’s because he’s technically not cheating on you or being unfaithful to you, as you know all about it anyways. But at the same time, he gets to get intimate with another woman. Now, that’s every man’s dream! [Read: Is it love or lust?]

So who’s happy and who’s sad?

I know it hurts, and it does hurt a lot. A part of you just wants to break up, but another part convinces you that you’re just being over-possessive or jealous. But deep inside you know that you’re right and he’s wrong. Even if he does have a girl best friend, it gives either of them no right to get flirty or touchy feely when you’re around, or even when you aren’t around. [Read: Is he serious about you?]

So how does this leave you feeling? Pathetic, deprived and miserable!

How does it affect him? Well, he feels great and loves the attention!

How does it leave her? She’s ecstatic!

She’s able to draw his attention away from you, right under your nose, and you can’t do a thing about it. And she thanks him for his unrealized part of her ploy by planting a wet kiss on his cheek. Sometimes, life can be a bitch, and as always, days when you bump into her with your guy can be a big bitch with a load of puppies!

So she’s happy, your man’s happy. What about you? You’re really sad and confused. Now why do you really have to put up with this shit?

If you ever have to put up with your boyfriend and his girl best friend petting each other in public or exchanging dangerously close cheek kisses, make up your mind on two things. Dump him. Or figure a way to stop her by reading how to deal with your man’s flirty friend.