Should a Girl Dumb It Down to Impress a Guy?

It’s always been understood that girls have to play dumb to get a guy’s attention. But should a girl dumb it down just to impress a guy? 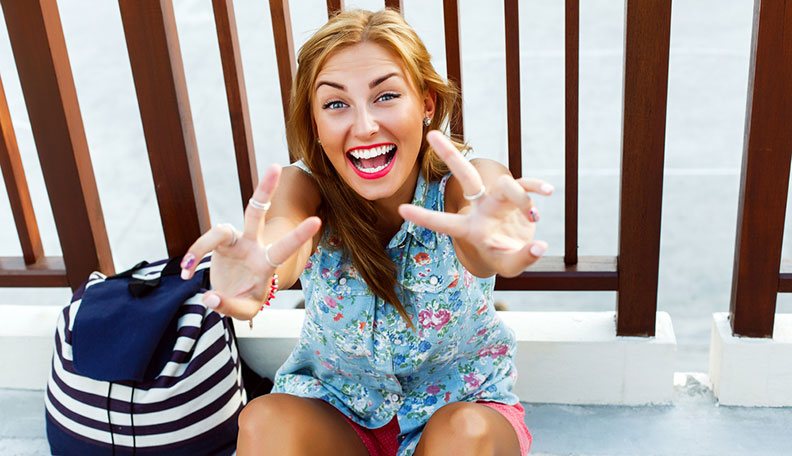 For a long time, I’ve heard many women say they had to dumb it down to impress a guy.

But I’ve never understood it.

So do girls think they have to pretend to be an idiot just to get a guy’s attention?

[Read: How to get a guy’s attention no matter where you are]

Does that really work?

Well, in most cases, it may work.

But is that the right thing to do?

Well, here are some things you need to keep in mind before going blank in the head and plastering a grin on a date.

Should a girl dumb it down for a guy?

It’s a delicate balance. A man will not appreciate a woman who makes him feel less powerful. And thus, the cycle begins.

Men have always been attracted to physical traits of a woman more than anything else.

And even if a guy denies this, guys would prefer to date a gorgeous girl over a clever plain jane. [Read: How men really fall in love]

So does that mean you should pretend to be dumb even if you have an I.Q. of 180?

Of course not. As long as you don’t emasculate a guy on a date or make him feel like a toddler who’s with his nanny, any guy would love to date a smart girl. Secure men aren’t afraid of smart women. In fact, they love them. For a great guy, dating a smart woman is a perfect challenge that can do more good than bad for him. He can learn from her, he can have intelligent conversations with her and he can definitely ask for her opinion when he needs advice. How can that ever be a bad thing?

Do you think you’re smart? Or are you the dumb one? To be realistic, there are no dumb girls or smart girls. There are just girls who are more aware of things and girls who are less aware of things around them. And then there are girls who think fast and girls who don’t think fast. Ask a geeky rocket scientist lady about the dirt on a recent celebrity break up and she may have no idea about it. Wait a minute, isn’t that dumb?

All of us have our own priorities in life. And lady, just because you know more about something brainier doesn’t give you the right to treat a man like crap or think you’re smarter than him just because he’s not aware of something you’re aware of.

As individuals, we have our own interests and this disparaging attitude of a few women who think they’re better than anyone else and have to play dumb just to fit in is plain idiotic. [Read: 10 annoying girlfriend habits that guys hate]

Guys don’t go looking for dumb girls. But almost all the time, guys have a better time with dumb girls. Why? Well, let me count the ways.

#1 Dumb girls are easily fascinated. It’s true. All a smooth talking guy has to do is talk about his imaginative experiences and she’ll sit doe eyed with little bits of drool and beam at him all night long. A guy would like any girl who gets fascinated by him.

#2 They’re not intimidating. Dumb girls are easy to approach and easy to talk to.

#4 Dumb women boost a man’s ego. They never make him feel small or weak. Men have epic egos and if it’s shattered by a woman, he’ll definitely avoid her.

#5 They make a man feel powerful. Guys like a girl they can dominate or manipulate. It’s easier to get things their way through manipulation and confusion. This is something both sexes enjoy doing, so we can’t really take any sides here. [Read: Easy tips to manipulate a guy]

#6 Dumb women give more control to a man. Give a man some control and he’ll love you for it.

Now these are not traits that men like about dumb women. In fact, these are traits that all men like in any woman they date. [Read: 8 things guys like in girls more than anything else]

What guys hate about smart girls

On the other hand, we have the smart women, the ones who think they know it all. And almost all the time, guys end up walking out of a relationship with these women for these reasons. [Read: 15 signs you’re a high maintenance woman]

# Smart women can be insensitive to a guy’s wallet. Don’t gift expensive bling to your man unless he gifts you something just as expensive first. You’ll shrivel him up down there.

# Smart women almost always earn more. Don’t intimidate him with your bank balance. Men know smart women earn more or you wouldn’t call yourself a smart woman. You don’t have to rub your wealth all over a guy’s face and make him feel small about it.

# Smart women are smug. Don’t pretend to play dumb and snigger each time your date says something wrong or silly. Guys hate a girl who plays dumb and yet obviously behaves like she’s too clever for him.

What can a smart girl do to impress a guy?

You may be clever, but it only takes a bit of common sense to be the girl that guys like. You really don’t have to pretend to be dumb. Here are a few things you can use, instead of role playing a dodo on a date.

# Be fun. Don’t talk about your work or dig deeper into anything else that he may not be aware of. Have a normal conversation with him and get to know more about him instead. [Read: Tips to make a man fall in love with you on a date]

# Keep it light. Avoid talking about anything too sensitive. Have an easy conversation instead of talking about politics or drama. Of course, you can talk about such touchy subjects after he gets to know you better.

# Don’t constantly look for ways to put a guy down. When you go looking for trouble, you’ll definitely find it sooner than you think. Are you the kind of perfectionist who wants everything to be perfect around her? Do you hate it if a spoon is out of place at a restaurant or if a guy pronounces a word in a funny manner? Well, some guys may think you need to have a spoon stuck up your rear end.

Instead, just accept the real truth. We’re all full of flaws in our own ways. Accept your guy’s flaws or help him overcome it. But don’t ever behave like an exaggerated smart ass perfectionist on a date because *guess what* you’re not that perfect anyway! [Read: 20 reasons why a guy may never ever like you]

#1 Men may not care about intelligence to start with, but they definitely admire it.

#2 Men love a woman who’s independent when she has to be.

#4 Women who can be manipulated may seem like fun for the first few months, but after that, a guy would hate the fact that she has no mind of her own or can’t answer anything but “whatever you say…”

#5 Smart women can carry on a perfect conversation no matter where she is. And if you’re impressing people while you’re in your man’s arms, he can’t help but fall harder for you. [Read: How to talk to a guy and make him like you]

So should you dumb it down to impress a guy?

I’ve heard a lot of girls boasting and whining about how they’ve had to dumb it down just to keep pace with their boyfriends and make them feel better. But really, are you playing dumb for your man to feel better or are you doing it just to feel good about yourself and give yourself an ego boost?

Your man may seem less intelligent than you. But that doesn’t mean he’s an idiot who needs your pity and sympathy in return for love. Love isn’t built on ridicule and ego. It’s built on mutual respect. Can you ever love a man you don’t respect?

So should you dumb it down to have a steady boyfriend? Hell no! Even if you did dumb it down for a guy, how long can you keep the act up? Just be yourself and wait for the right guy to like you for who you are.

And to be the girl that your man would desire and want, learn to mix a bit of dumb and smart. As long as you earn his love, respect and appreciation for the person you are, you’ll always have a perfectly happy relationship.

So should a girl dumb it down? Perhaps, only on the first date while you evaluate if this guy is even worth your time. But if you’re playing dumb at any other time, you’re just an idiot who thinks she’s smart! [Read: How to get to know a guy you want to date]