20 Kinky Things to Do With Your Boyfriend Beyond the Bed

Want to show your boyfriend you’re more than just his mom’s approved choice? Here are 20 kinky things to do with your boyfriend to unleash your inner minx! 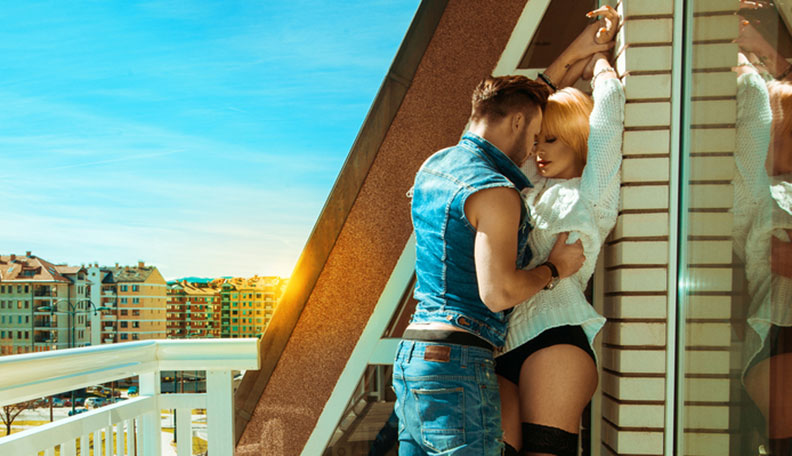 Getting kinky comes easy, once you know what you’re doing. Rather than being afraid of your boyfriend’s reaction, be confident about your actions and words, and watch as he loosens up and looks at you like he’s never looked before…

Add some creativity and a new location to that confidence. Put away the good girl act, and tell him what you want—how and where. Think beyond the bedroom, and treat him to a steamy, dirty, insatiable romp on the floor or table, in the car or a public bathroom, and fulfill each others’ desires.

Are you looking for a full list of the best kinky ideas that are worth trying at least once in your lifetime? Check out the top 50 kinky ideas for a lust-filled and sexy relationship before reading on!

20 kinky things to try with your boyfriend

Here’s a list of guaranteed ways to leave him speechless and coming for more!

#1 Be the biggest tease in the shower. Many couples have sex in the shower, and consider that steamy enough. While it can be exciting, that’s still thinking inside the box. Try intentionally leaving the door cracked when you shower, and letting him spy on you. Let him shave you, lather you up, or both. Whatever you do, don’t have sex until after you’re good and “clean” for him.

#2 Be an exhibitionist. There’s something about going out wearing a dress or skirt, without panties, that makes a woman feel sexy and free—even naughty. While he might be jealous at first, or concerned someone else might lay eyes on you, there are ways around that. Choose a skirt that is just short enough to turn him on, but that won’t show anything, and don’t bend over. It’s a giant tease, especially if you hand him your panties underneath the table. [Read: How to discreetly get naked in public for that sexy rush]

#3 Inappropriate times are the best times to sext your man. Next time he’s at work, visiting relatives, or taking an exam, send him dirty messages. Tell him how it feels when he goes down on you, and send him teasing pictures. Tell him about your fantasies, and describe what you’re doing at the time, assuming it’s relevant *which is probably naughty as sin*.

#4 Have sex in a public place. Bedrooms are a given, but get boring very quickly. Try having sex in a public bathroom, in a hidden spot at a park, a rooftop, or the car while in a parking lot. The only limit is your imagination.

#5 Try role-playing, in public. Role-play is a great idea, and whoever thought of it first is a god. Take it one step further, and have your man dress up as a cop and arrest you out in public. Go to a library dressed as a librarian, and have him ask you for help with his boner in one of the empty aisles. Meet up at a bar, and pretend you’re strangers. [Read: The sexual role play guide and examples for beginners]

#7 Surprise him on his lunch break for a quickie. Sure, he might be too tired after work, but what about during? Text and ask what time he goes on lunch—unless you already know—and show up, ready to take him out back.

#8 Film it and use it later, together. There’s nothing sexier than looking back as your man gets his way with you—unless, of course, you film it. Not only does it make sex hotter, it also makes for a naughty good time later, once you’re both ready to go again. Play it in the background, and get off to each other like never before.

#9 Heat up the hot tub. Don’t heat up the hot tub, expecting it to make you feel hot. Go into it feeling hot. Practice some oral sex, or even just foreplay, in the hot tub, and tease him for a while, before letting him have his way with you. Then switch. [Read: 12 foreplay moves that work exceptionally well on men]

#10 Flat surfaces aren’t safe. Make it a goal to do it on every table, counter, and wall in your home, and watch how quickly the bedroom is forgotten.

#11 Mirrors are an asset to kinky couples. If there’s a large mirror in your bathroom, home office, or even your closet, try heating things up in front of it. Not only will it be hotter, it will give you access to all sorts of views you couldn’t get otherwise.

#12 Turn productivity into something far more fun. Next time you have work to catch up on at home, do it naked, wearing nothing but his favorite items on you. It may be heels, knee-highs, or glasses. He won’t be able to resist sitting in your home office, watching you, and maybe even touching himself while he watches.

#13 Take the kink outdoors. Some shy couples might opt to do this if they have a private backyard, but others might do it regardless. Having sex outside, in the yard, is a great way to add an element of danger, or exposure, without having to go anywhere “public.”

#14 Have sex in a very inappropriate place. Whether it’s a church, a cemetery, your parent’s car, an elementary school, or a children’s playground at night *when no one’s around!*, no place is safe from you two!

#17 Make a sex date. If you know you’re free for a half hour at 4 PM, let him know and watch as he does anything to be there. He’ll spend the whole day staring at the clock. [Read: 10 subtle ways to get your man in the mood for naughty romance]

#18 Surprise sex. If your man just walked in from work, greet him wearing barely anything, and unzip his pants. Take him however you want him: on the floor, couch, table, and anywhere else you want. Take the lead, use him, and watch as he gives you your way willingly and eagerly.

#19 Dirty, steamy lipstick messages. Next time he’s in the shower, leave him a dirty message with lipstick on the mirror. He’ll read it on his way out of the bathroom, and find you waiting on the kitchen counter. [Read: 50 dirty, sexy things to say to your boyfriend]

#20 Spice up those family reunions. If you’re at your parent’s house, visiting family, or even driving with family, don’t be afraid to get frisky. Give him a hand job under a blanket in the backseat, or scurry off into another room in the house. Go outside, or take over the basement. Wherever you choose to do it, you’ll have to be quiet, and you could get caught, making for a kinky time.

[Read: 50 kinky things that are worth doing at least once in your lifetime]

Kinky sex is best when it’s done outside of the bedroom, because you can explore your sensuality together. Don’t be afraid to consider the impossible, and show him how crazy you can really be. Unleash that frisky diva of yours, and take advantage of spare time, hidden places, public places, and *most of all* him.

Jennifer Mendez
Jennifer is a writer, director, consultant and author, with a passion for all things literary. While she works on a variety of projects at a time, her one true ...
Follow Jennifer on Twitter
Pin It Tweet Share