How Often Do People Have Sex to Maintain a Healthy Relationship

This question’s on every couple’s mind: how often do people have sex? In order to have a healthy and happy relationship, this is how often to have it. 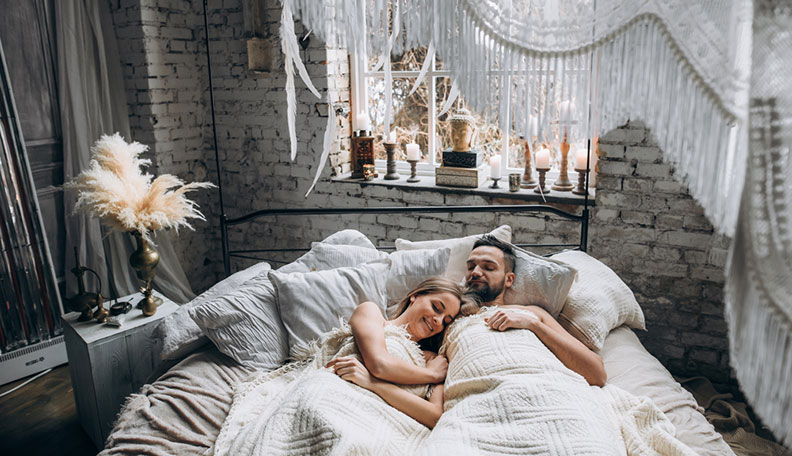 No two couples are the same and no two people are the same. Our needs vary and that’s perfectly fine. But that being said, how often do people have sex in order to maintain a healthy relationship and does it actually make a difference?

The short answer is that yes, the amount of sex you have certainly makes a difference in the health and happiness of your relationship but it also depends on the couple. Knowing how often people have sex can help you understand if your relationship is up to par.

What about keeping your body healthy? Sex is fantastic for you in general. It boosts your immune system and also gives you a great workout. People who have sex more often also report feeling happier and more satisfied in life even outside of their relationship.

So the reasons to have more sex are nearly endless. Keeping your sex life in check is a great way to ensure you’re healthy in other areas, too. All around, more sex is better for life. [Read: 14 incredible benefits of sex that’ll make you want more]

How often do people have sex?

The answer to this honestly just varies. You can assume, however, that the average, happy couple has sex a few times a week. This will change at different stages in their lives and in their relationship but overall, couples have sex enough to stay satisfied. If both people are happy, it’s enough.

Things that can affect how often you want to have sex

There are a lot of reasons couples could be having less sex than the average. Here are a few of the main things that can affect how often couples have sex.

#1 Mental illness. There are so many mental illnesses out there that can affect a person’s libido. The most popular are depression and anxiety, though there are many others that can be a problem. When someone has a mental illness that brings their libido down, they just won’t have as much sex. [Read: Why we need to break down the stigma of mental illness]

#2 Conflicting schedules. This is probably one of the biggest reasons many couples don’t have what they think is enough sex. One person works during the day, the other works at night, and it seems like your schedules never match up. If you can’t get together to have sex, you won’t have it as much.

#4 Physical health problems. Just like with mental health issues, your physical health can take a toll on your libido. If you’re out of shape and not healthy, you may not feel like having sex. Eating junk food and even not exercising enough can contribute to a low libido.

#6 Busy lives. Some couples are just so busy they don’t have time to have sex. They crawl into bed at the end of the day and just pass out because they’re exhausted. Many couples with kids have this problem and it can really stunt how much sex you have. [Read: 6 ways to stop glorifying busy and start living instead]

How to have sex more often

If you’re unsatisfied and you want to be having more sex, these are a few ways to do so. Just remember that both people have to be willing to hit the sheets more often for these to work.

#1 Talk about it. If you have an issue with having enough sex, you have to talk about it. Being unsatisfied in the bedroom can lead to a whole host of other issues if ignored. So sit your partner down and express your feelings.

Don’t bring it up out of frustration, however. You want to make sure you leave room for an open and honest conversation about what you’d like to change.

#2 Carve out time for it. Sex isn’t just something that you can wait for. Sometimes you have to make time for it. This is especially true for couples who have busy schedules or jobs that don’t allow for them to see each other often. You have to schedule it and figure out when you two can get together to get the deed done. [Read: 18 naughty ways to make time for sex with a busy schedule]

#3 Do it even if you’re not quite in the mood. Sometimes sex just has to happen. The more you go without it, the less you’ll want it. That means you may just have to do it sometimes until you realize how amazing it is. Just never force yourself if you’re really not feeling it because that can lead to resentment.

#4 Figure out if you have any health issues and work to correct them. You may unknowingly have some health concerns that are making it difficult for you to want to have sex. Go ahead and see your health care professional in order to get to the bottom of it.

#5 Initiate it more. How often do you really try to have sex with your significant other? Are you just harboring this resentment over not having enough sex even though you’re not trying?

It’s important to initiate sex because your partner could be feeling the same way. So go up to them and try. The more you initiate it, the more they will and that means you’ll have a lot more sex than you are right now. [Read: How to initiate sex and turn your lover on in alluring new ways]

#6 Spice it up so you’ll both want it more. The fact that you’re not having a lot of sex could have to do with how it is when you DO have sex. Which means it might suck and it could even be boring.

That’s perfectly normal in longer-term relationships. However, you do want to make sure you’re spicing things up so you don’t fall into the same routine again and again. Doing that will only make both of you not want sex because if it’s not good, what’s the point?

#7 Solve any bigger relationship issues. If you’re not having sex as a result of complications in your relationship, then fix them! It’s that simple. Sit down and have a discussion about what’s going on and how things can go back to normal.

This might involve talking about what you both want on a deeper level and really opening up. Work on this and you’ll have a much better sex life.

#8 Eat more aphrodisiacs. If you want more sex, then get yourself in the mood more. Downing foods like chocolate, red wine, oysters, and other aphrodisiacs will put both you and your partner in the mood. So take them on a date and have only these on the menu.

[Read: How often should you have sex?]

So how often do people have sex? On average, couples are hooking up a few times a week but it truly depends on each unique relationship.